in Maintaining your equipment, 0 comments

Can you store a lawnmower vertically? 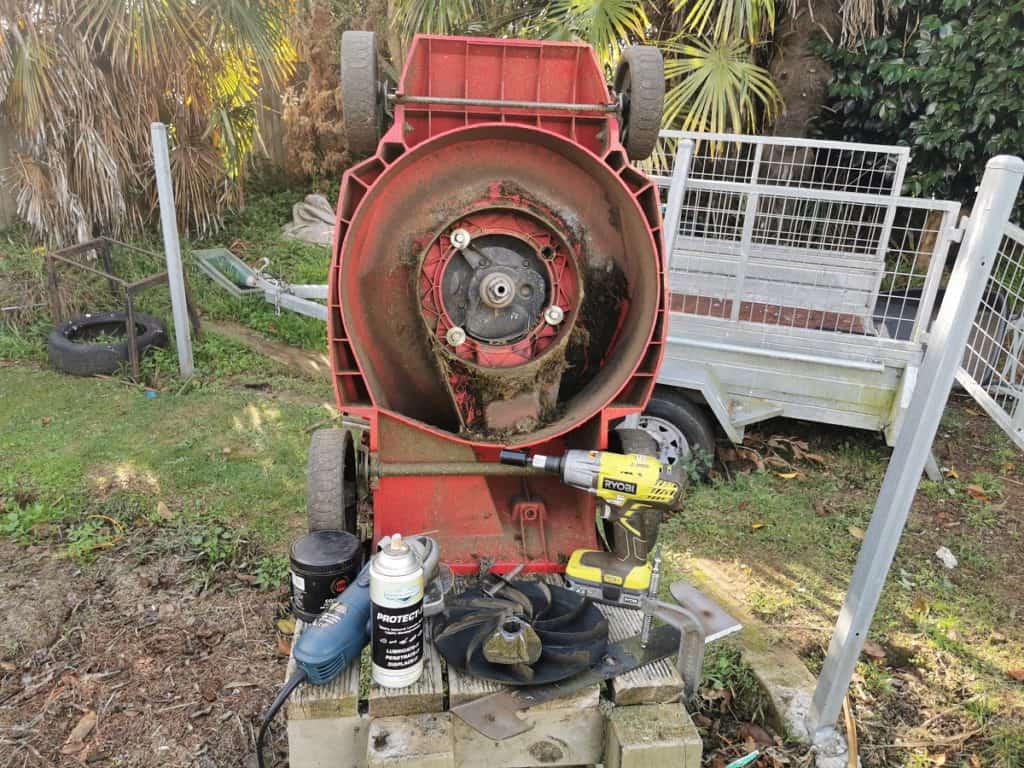 Why would you want to store a mower Vertically?

How you ever looked at your mower and thought about all the space wasted. Wouldnt it be great if you could  store it vertically or even hang it on the wall?

Vertical storing reduces the storage footprint of your lawn mower by up to 70%!

Now that saves a lot of space and give you a bit more room for the car.

It would also mean you could pack it out of the way for the winter if you don’t mow all year round.

Now I must admit after 30 years in the industry I could see no reason why you couldn’t store a lawnmower vertically when I was asked. I have done it myself a few times over the years. I was surprised when I did a search on Google and the first two results said No.

I had to disagree.

Talking to the experts

Just to make sure I wasnt missing anything I rung the a small engine technician  at the repair shop I have used for years.He confimed my thoughts.

Then I rang the grandaddy of engines, Briggs and Stratton, and asked them directly. I told them I was thinking about building a rack for at least half a dozen petrol-powered lawnmowers with Briggs engines. I even told them that some of my engines were up to ten years old. They said that there would be no issues storing the mowers like that.

Can you store a lawn mower vertically?

The short answer is Yes,  as long as the spark plug is facing the sky allowing the oil to drain into the sump. Also, do make sure that the machine is level and not leaning to the left or right. This can cause the oil to flood the air filter or the muffler.

However, I must also point out the most petrol mowers are not designed to be stored vertically. This is a design issue nothing more. There are a couple of companies making lawnmowers that can be stored vertically nowadays, such as the new Mow N Stow vertical storage mower. These mowers have fittings on the handlebars that you can set the mower on as pictured below. It runs a standard Briggs engine.

You can read more about this mower on Amazon

Having a mower that tilts like this would also make it really easy to clean underneath.

This does not mean you can flip your mower on its side.

A word of warning here. Just because you can tilt a mower upwards for storage (or even for cleaning underneath) you can NOT flip the mower on its side.

If you try this with a four stroke mower you are going to cause some problems. When you look at a standard lawnmower engine it normally has the air filter on one side and the muffler on the other. This is where it can go wrong.

If you flip a four-stroke mower on the air filter side then gravity will cause the oil to overflow into the air filter. Then when you try to start the mower it will not start because it cannot draw in any air. If you are working all day in the rain a wet air filter can present the same symptom.

If you were to filp the machine the other way, then the oil would run into the muffler. Your machine may start but it will run terbiley and smoke like crazy until all the excess oil has burnt off. A really bad idea.

Mowing on a steep angle.

You can even run into this problem if you try to mow a lawn that is too steep with a four stroke. Your adverage mower will cut on an angle of up to 20 degrees. This is only if you are cutting sideways. If you are cutting by pushing the mower vertical up and down the hill (not recommended btw) then you wouldnt have that problem. Just to give you an idea of a 20 degree angle I have included an example below.

How about two stroke mowers, can you store them vertically too?

Two stroke engines are different as they do not have an oil resuvoure they rely on the operoter using a mix of oil and petrol when fueling up. Thsi means you do not get the same issues you get with standard four stroke.

There would be no issues with storing a two stroke mower vertically except perhaps getting it to balance.

Most of the really small engines like blowers, string trimmers and hedgecutters are all two stroke engines. A lot of lawn care operators throw these machines around a lot. I have traveled with blowers that were upside down in a vehicle and as long as the fuel cap is not loose I have neve had a problem.

I even have half a dozen string trimmers and a pole hedge trimmer that hang vertically in my garage sometimes for months on end and it has not affected the machines in any way.

Can you flip a two-stroke mower?

There are no issues flipping a two-stroke mower. You simply roll it onto its side. Because the oil is in the fuel it does not create any issues. Having said that do remember to disconnect the spark plug before doing this.

Mowing on a steep angle with a two stroke.

As long as it is safe to mow then a two-stroke will do the job. When I was working on the coast I had one lawn that was so steep it was dangerous. In fact, the owner had lost a toe mowing the lawn so he had given up. I used a two-stroke Flymo with a rope and pulled it up and down the bank. The machine ran fine but I found it exhausting.

A few final suggestions when storing a mower vertically.

For anyone who still has reservations I will put my money where my mouth is.

I have a spare mower that I use as back up. This weekend I will find a spot in my garage to store it vertically and I will do an update on this post in a few month’s time.

About the author lawnmowing101

Stuart Clifford is the owner of Gecko Lawns.
He has been building and selling lawn mowing business for the last thirty years. Last year he sold off most of his lawns and now earns a full-time income doing a 20 hours work week mowing lawns. Stuart has helped lawn mowing contractors grow and sell their businesses. He has also done lawn business evaluation for buyers. He now enjoys writing about lawn mowing much more than actually mowing lawns.
The Gecko Lawns website is https://www.geckolawns.co.nz/

Check Out Our Latest Articles